"Building Community, One guitar at a time!" 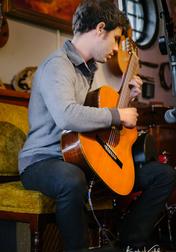 Victor is a passionate performer and teacher based out of Rhode Island. After beginning his guitar studies in high school at the age of 16, Victor quickly decided to pursue his passion for music at the conservatory level. He received his Bachelor of Music in Guitar Performance from the Mannes College of Music in 2011 where he studied with Michael Newman, Frederic Hand, and Terry Champlain.

While studying in New York City, Victor had many performance opportunities including the Morgan Library, the Americas Society, the Oneata Guitar Festival, the New York Guitar Seminar and Carnegie Hall's Weill Recital Hall. Victor has also participated in a number of successful chamber ensembles. One of those ensembles was a finalist in the New York Youth Symphony’s chamber music competition in 2007 which resulted in Victor’s second Carnegie Hall appearance.

Victor has performed in many master class settings led by some of the worlds most respected guitarists. He has played for Denis Azabagic, Oscar Ghiglia, Carlos Barbosa Lima, Pepe Romero, David Tanenbaum, Benjamin Verdery, and Fabio Zanon.  Victor has also studied privately with Thomas Viloteau (2008 winner of the Guitar Foundation of America's International Concert Artist Competition) and Joao Luiz of the Brazil Guitar Duo (Concert Artist Guild winners in 2008). Victor also had the honor of studying with Sharon Isbin (Head of the Guitar Department at the Juilliard School) at the Aspen Music Festival during the summers of 2011-2013.

Victor is not only an active performer but an avid teacher as well. His first teaching positions were held in Rhode Island, at The Music School in Providence, and at Main Street Music in East Greenwich. During College from 2008-2011, Victor taught guitar performance and basic music theory classes at the Richard Lissemore Music Studios in New York City and the Hunterdon Achedemy of the Arts in Flemington New Jersey